Sheriff Danny H. Rogers was sworn into the office on December 3, 2018. He is a native of High Point, North Carolina with a high school education from Southwest Guilford High School, college degrees in Theology and Criminal Justice, and a Master of Science degree in Criminal Justice and Executive Management from Walden University. He worked as a business owner and law enforcement officer for years with the Guilford County Sheriff’s Office and the High Point Police Department prior to being elected.

Sheriff Rogers entered office determined to lead an agency with equal protection under the law for all Guilford County citizens and equitable employment practices to meet the needs of a very diverse community. Guilford County Sheriff’s Office is one of the largest law enforcement agencies in North Carolina serving close to 500,000 citizens with more than 600 employees that include sworn, non-sworn, and civilian staff.  He is responsible for a budget of approximately 68 million dollars, two jail facilities and courthouses in Greensboro and High Point, and patrol duties of several small towns inside Guilford County.

Sheriff Rogers has instituted proactive tactics to fighting crime, challenging injustice, and works alongside his officers to get the job done. He is committed to reducing crime, providing safe schools, streets and neighborhoods, eliminating drug and gang activity through youth program initiatives, combating sex trafficking, reducing recidivism, addressing mental health concerns inside and outside the jails, preventing domestic violence, and requiring community policing. He understands that the new Guilford County jail opened its doors the same day one of the oldest mental health hospitals in North Carolina closed its doors and now incarceration has become a storage facility for people in crisis. As a result, he is committed to reentry initiatives that will reduce crime, expand services for mental illness, and bring positive transformations to families.

Sheriff Rogers makes time to meet with people in organizations, leadership roles, diverse ministries and faith denominations, youth groups, school children, boy scouts, and civic groups. He has initiated the accreditation process for the Guilford County Sheriff’s Office, restructured the agency to reflect the community served, implemented reentry services aimed at reducing recidivism, and met with county leaders to explore cost saving measures to tax payers in the rebuilding of the old jail facility. He is honored to be your Sheriff and he asks that everyone work together to enhance the quality of life for all our citizens. 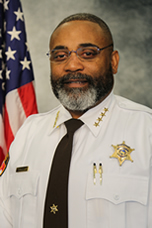