Sheriff Danny H. Rogers reports on June 21, 2019 between 12:00 am and 3:37 am numerous motor vehicles were found to have been broken into in the Ridge Creek community located in Whitsett, N.C. At approximately 3:37 am Guilford County Sheriff’s Office deputies responded to the 1100 block of Oak Blossom Way after a citizen reported finding multiple vehicles with the interior lights turned on. The responding deputies encountered a suspicious vehicle with two occupants at the intersection of Oak Blossom Way and Hibiscus Ct. Upon further investigation stolen property was located inside the vehicle leading to the arrest of Tango Muir (16) and Keyshawn Keaton (16) both of Greensboro (photos provided below). Additionally, an unoccupied vehicle was located in the same area with the engine running which was later determined to have just been stolen from the Ridge Creek community. The unknown suspects fled from the stolen vehicle and were not apprehended. 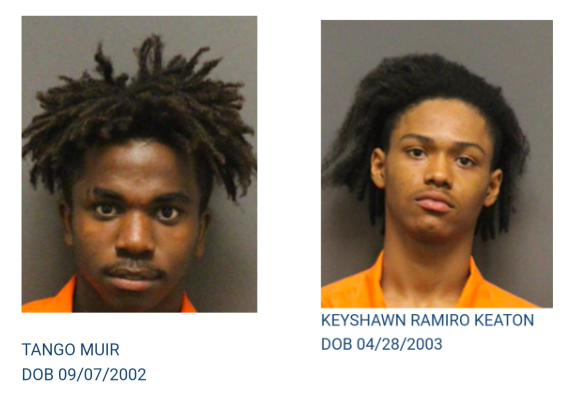